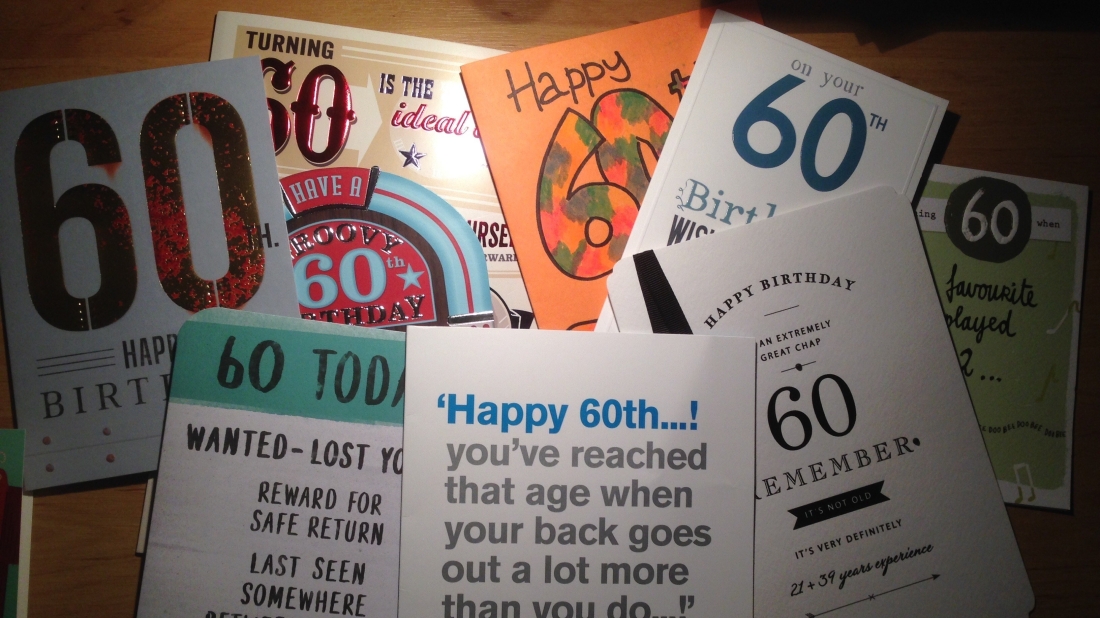 I stand at the portal that will allow me entry into a new age of discovery. The doormen of Nirvana have found me to be on the list and have grudgingly agreed to let me in. There are many benefits to belonging to the club that I will shortly join: I can take tea and biscuits with my fellow sexagenarians in the designated café; I can board the bus to Rhyl with a half-empty suitcase and a clear conscience; Lord knows! I may eligible for a discount on a stair-lift or a sit-in bath. I have reached the age when I understand that I should always smile sweetly at the dentist, because to gnash my teeth at his suggestion that I need several long-haul holidays-worth of dental treatment is merely putting money in his already bulging pockets. I have attained the maturity that allows me to comprehend that the true joy of an April day by the east coast seaside cocooned within fourteen layers of thermal clothing to protect against the unseasonal scything on-shore breeze and draped in a slightly too small cagoule that herds the interminable arctic drizzle into the large drips that run around the rim of the hood before depositing themselves into the ever-swelling puddle on my crotch, whilst I push fish and chips around the paper as they congeal in front of my eyes, is the knowledge that there is no point in doing it, other than knowing that I don’t have to do it – but, shit, while I can, I will. I have begun to appreciate the myriad joys of getting older. A whole new world of revelation has opened up before me. I have entered, in short, a second phase of enlightenment and realisation.

I have opened my mind to learning, although, truth be told, most of what I have learned is how little I know. My discoveries, such as they are, are modest – they are not of Newtonian proportions. What I have not discovered would generate a ‘to do’ list that could keep Isaac and his apple occupied for a very long time. I have not discovered, for instance, what makes me stick to this globe of ours. I tend to adhere to the Velcro Theory. In fact, to tell the honest truth, I actually find myself irresistibly drawn towards the flat earth theory, simply because I do not understand why, wherever I go in the world, I am always the right way up. Hold up a football and put something on the bottom of it; what happens? Yup. If the world is actually a sphere, what prevents the Australians falling off? Forget gravity. Gravity is everywhere. It can’t even hold my glass on the table after six pints. And also, if the world is a globe, how come all the water doesn’t flow to the bottom? Never thought that through did you Pythagoras?

Mind you, I must admit that physics was never one of my strengths. I can still recall the look on the face of my teacher when he read my test paper aloud to the class, with special emphasis on the question ‘What is resistance’, to which I had answered ‘Futile’. I thought I was being endearingly amusing. He thought I was being an arse. Guess who was correct? I would never discover a new continent, even if one were to exist, because that would almost certainly involve sailing off into the unknown and, quite frankly, I have enough trouble sailing off into the known – and only then when I have double-checked the catering arrangements. And as for finding a new planet, I can barely see the television in these contact lenses, let alone an infinitesimal blob at the far end of the universe. No, the things that I have learned are of a much more personal nature. I do not know if they will make a difference to the lives of others. I do not know if they were at any time unknown to others. What I am beginning to know, I think, is what everybody else has known all along.

I have discovered that stairs are arranged singly for a reason; there is nothing to be gained by ascending them two at a time. I know that escalators move so that you do not have to. I have learned that there are only two types of shoe; those that fit and those that look good: no single pair of shoes is ever able to meet both criteria. I have learned that rows of buttons are always to be fastened from the bottom in order to avoid having one left over at the end. I have learned that hats are for other people.

I have begun to understand that there is no point whatsoever in attempting to take a photograph with my mobile phone. Nobody is even faintly interested in a close-up of my nasal hair, nor do the staff of The Raj Palace want another silent call from me. I have grown to realise that I have lost the innate ability I once had to know whether an acquaintance was older or younger than I. Everyone of my age looks so very old. I have begun to understand that no-one younger than me actually sees me as younger than I am. That the way I viewed people of my age when I was my daughter’s age is exactly the way that people of my daughter’s age now view me – eccentric; mildly amusing in a ‘let’s just humour him’ kind of way, but definitely to be kept at arm’s length as the risk of slight urine/saliva contamination is ever-present and increasing. I have discovered that the only thing more annoying than a younger man in an extremely expensive car is an older man in an extremely expensive car. I have begun to realise that nobody ever gained anything from arguing (except, for some, a lucrative career). Stealth is the answer. Age gives one the time to wait and the insight to appreciate that there is absolutely no finer moment than the acutely timed ‘I warned you that would happen, but you never listen do you? Oh no. You always know best…’

I have also begun to understand that advancing age is not to be feared, it is to be embraced. Embraced for its ability to allow me clearer vision than sight. Embraced for its ability to grant me the realisation that what is right for me, may not be right for anybody else, but quite frankly, that I care even less than they do. Embraced for the realisation that my appreciation of the world around me is linked, incrementally, with the paucity of time that I have left to enjoy it. Embraced because I have no choice. Embraced because it makes me happy.