And I would just like to wish you all a happy, healthy and peaceful New Year. May all of your wishes come true. 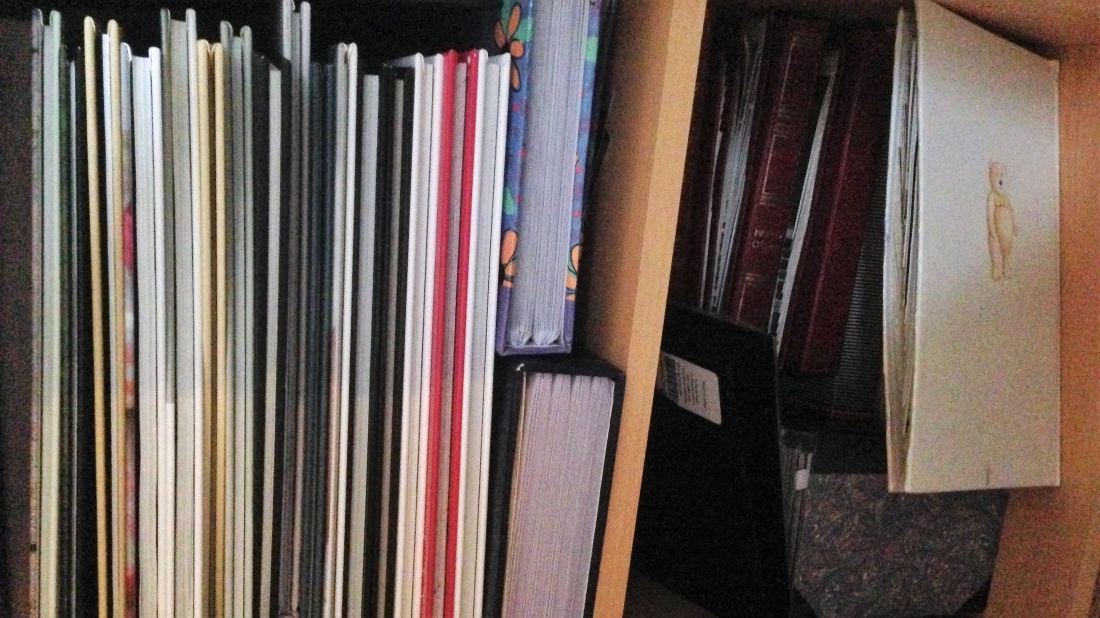 My granddaughter’s cot, it transpired, was in the wrong part of the room. When she came to visit it was fine: easily accessible, not too close to radiator or window, but when she was not around it was in the way. It needed to be in the corner, where the heavy cupboard was. I tried to move the cupboard – I really tried – but so immovable did it prove that I had to check behind it, to be sure that I had not, in a previous fit of pique, nailed it to the wall. I had not. The cupboard was not rendered fast by any manner of amateurishly applied anchor; it was made steadfast by the sheer weight of its contents. The path was simple: in order to reposition the cupboard, and thus the cot, I had to first disgorge its innards.

I opened the door and, with some trepidation, peered inside. There were piles of books – actually albums – all filled with the accumulated photographs that catalogued my life. Not just my own life, but that of my wife, her family, my family and our family. Six generations in that cupboard. No wonder it was a bugger to shift.

Now, the presence of the photographs meant that what was essentially a five minute job expanded to fill an entire afternoon. Photographs bring memories flooding back like nothing else. Memories of long-ago days by the seaside; memories of being a new, excited and just a teensy bit overwhelmed-by-it-all new parent; memories of events that the photographs suggest you almost certainly can’t actually remember (received memories I think they are called). Other things strike you: the realisation that you look just like your father; that your wife looks like her mother; that your children look both like you and their own children. And then you start to map out your own time-line in photographs and you begin to realise what sixty years have done to you. A chubby baby in a crocheted gown became a skinny child in a sleeveless Fairisle jumper, became an even skinnier youth in a tank-top and shades, became a three-piece-suited newly-wed, a shell-shocked bespectacled dad, a matching-suited father-of-the-bride and a T-shirted grandad. All of this with no perceptible change in what’s going on between the ears.

You see, the evidence is clear (indeed photographic): I have grown, I have changed, I have aged, but I don’t feel any different. Well, maybe just a little bit. Maybe I’m not quite as idealistic; a little more realistic, bordering on the fatalistic; definitely a little more jaded. Pessimistic/optimistic? Well, that depends: pessimistic about the planet’s future, but optimistic because it has my children to shape it and my grandchildren to live in it.
Anyway, I moved the cupboard and I moved the cot and then I packed my life away again and later, when my wife asked me what I’d been doing with my day, I couldn’t tell her that I’d just been moving the cupboard – because it took me sixty years to do it…