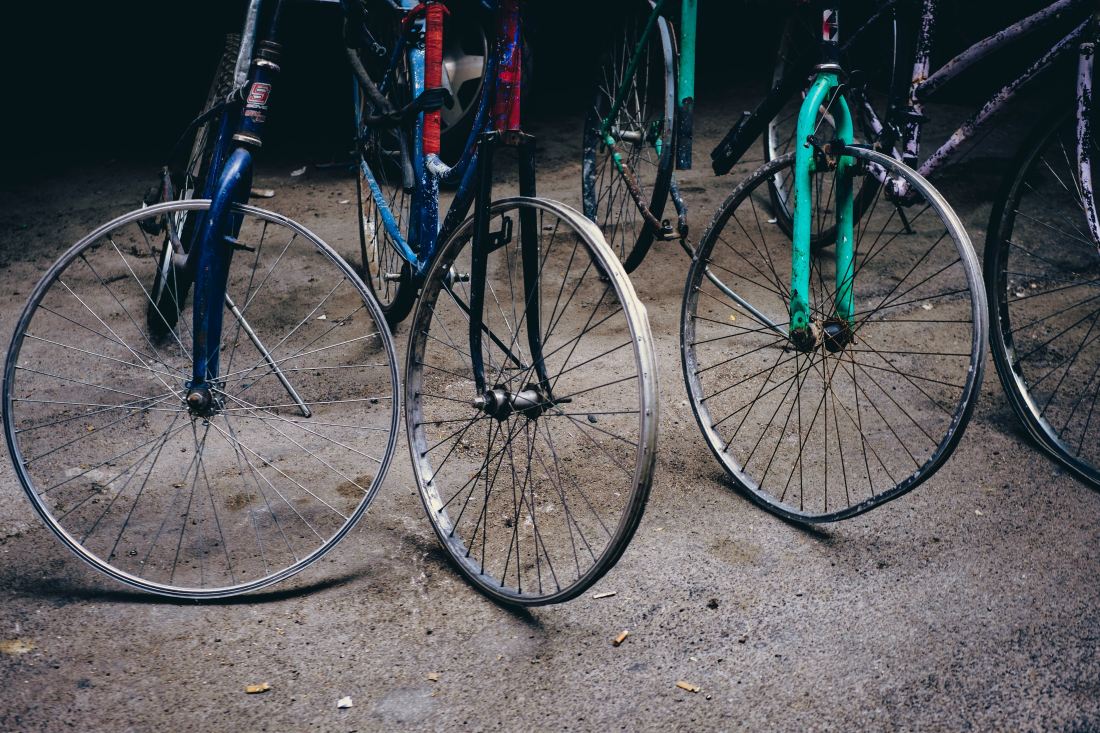 On a cold day I can still feel the abrupt end to the Irony descent. On a hot day, I can still see its aftermath. The Irony (iron-e) was an old open-cast mine site where we used to play as kids. Despite its nickname, what had been formerly mined there was not ironstone, but limestone, which I think is vital in smelting iron. It had, for whatever reason, long been abandoned and, by the time it became our playground, was little more than a shallow-sided hole in the ground full of bits of pram, bits of bike, broken this and broken that, dog shit, broken glass, fridges, cookers, soiled mattresses, tons of old asbestos and, occasionally, dearly departed pets. It was most definitely not the place to be and, therefore, we loved it.

On good days you could gather together enough part-bikes to cobble together a ramshackle whole. The wheels seldom matched – sometimes leaving the rider facing the floor at an angle of something like forty-five degrees. Both wheels and handlebars had a disturbing tendency to come adrift at the most inopportune of moments. The brakes never worked – most often the only practical way of stopping your downhill trajectory was simply to dive off and hope to not encounter glass or excrement. More often than not, the unfortunate ‘test pilot’ ended the day being carried home, like some shit-splattered dispatch-rider, to be dumped unceremoniously on his front-door step. (Injured boy’s mums were likely to lash out indiscriminately – particularly if school shoes had been damaged or shirts had become blood-stained.)

Another great resource were the clapped-out prams which, with the minimum of effort, became brilliant, if unstable, downhill tanks. The chances of reaching the bottom with the battered perambulator intact were minimal; yourself, even less so.

But neither ad-hoc bicycle nor buckled baby carriage, ripe though they both were with adventure and opportunity for bodily damage, could compare with the lure of an area that was simply unmatched in its suitability as a war-zone. We were of an age when it was always Dear Old Blighty versus the Dirty Hun – although, if all of the pram wheels were still pointing in roughly the same direction, there could possibly be a Japanese Kamikaze Pilot thrown in for good measure – and the game normally consisted of chucking whatever came to hand at one another as we dived in and out of our corrugated asbestos bunkers, until somebody – often me, to my recollection – had to retire to the nearest field hospital (kitchen) where they would be cleaned up and temporarily patched, before being sent off on the Corporation Bus to Casualty for more advanced embroidery and bandaging. The too-late-for-tea return home normally featured a clip-round-the-ear for not walking the dog which had, in desperation, crapped in your school bag.

It has been filled in now, the Irony. It is covered in ticky-tacky housing and a shopping mall. It is not half the fun it used to be, but I feel its presence every day. I feel it in the strange, bony lumps in my legs and the scars that tingle in the cold or stand out white against my sun-singed face in the heat. But most of all, I feel it every time I ride my bike and realise that the brakes aren’t quite what they ought to be and that the chain broke about five yards ago, just before the seat fell off its pillar…

A little note: please remember this was the 60’s. Boys and girls were barely considered to be of the same species. Girls played ‘house’ with dolls and read Jackie; boys played football, war or Cowboys and Indians. That’s the way it was. Not necessarily right. Not the way that we’d want, but just the way that it was. We can shape today, we can transform tomorrow, but we can’t change yesterday…

Why can’t we reach the sun?
Why can’t we blow the years away?
Blow away…
‘Remember a Day’ (R. Wright) Pink Floyd